After two years of networking, learning and developing of moduls and methods our project "CULPEER for integration" ends - but only as ERASMUS+ - funded project. Allt the partners and teachers in Bulgaria, Germany, Greece, Italy and Slovenia will continue their work with a deep impression and experience what the cultural peer-to-peer approach can contribute to the integration of young refugees and other underprivileged young people. Some of us will continue with that approach with using that approach for strengthening the Sustainable Development goals in curricula of schools. The headline will be "CULPEER for change.
But for all of us is the most important result of our cooperation: WE ARE ALL ONE! And because of that idea we present here a video of the presentation of around 30 young people from Peru and the participating countries:

The final partner meeting in Cologne 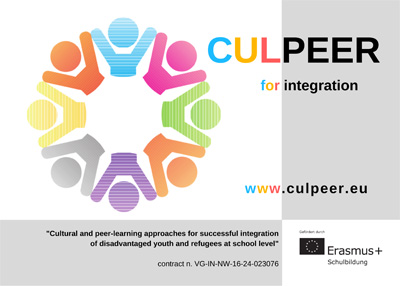 From the Acropolis to the Cologne Cathedral was quite a distance for the last partner meeting of "CULPEER for integration" from the September 27 - 29. After the extraordinary week with a teachers training and the workshop of the students in Cologne the CULPEER - networkmembers met for evaluation and other topics of the network.

Everybody agreed in the really overwhelming success of the project  It was reported that most of the teachers had during the days of the trainings their own peer-learning experiences.And some of them talked about inplementation of CULPEER into the curricula of their schools at home. The evaluation of the students workshop proved that the concept of CULPEER is really working as model for integration.

The students talked in their evaluation about their very positive experiences, about their discovered new talents and about their feelings in that very international creative group. And they felt very proud about the presentation they created during the few days in Cologne.

The evaluation took a lot of time during the network meeting. But nevertheless their was time required for the last tasks to divide among eachother. Especially the e-learning programme had to be adjusted with the results of the teachers training. Also other intelectual outputs had to be published and translated into the different languages.

Last but not least the network members talked about the use of all the material in their daily work and in future projects. Some will probably work together with CULPEER in another international project.

We all are one! - Todos somos uno!

Friday morning in the Willi-Brandt-Comprehensive School in Cologne: at 10 am a performance begins in the circus arena of the school, designed by approx. 30 young people from Bulgaria, Greece, Italy, Slovenia, Germany and Peru. After 45 minutes, the audience's furious final applause turns into wild dance. Teachers slap their pupils off, dance with them as if unleashed. Students lie out in each other's arms: happy and proud. What happened? 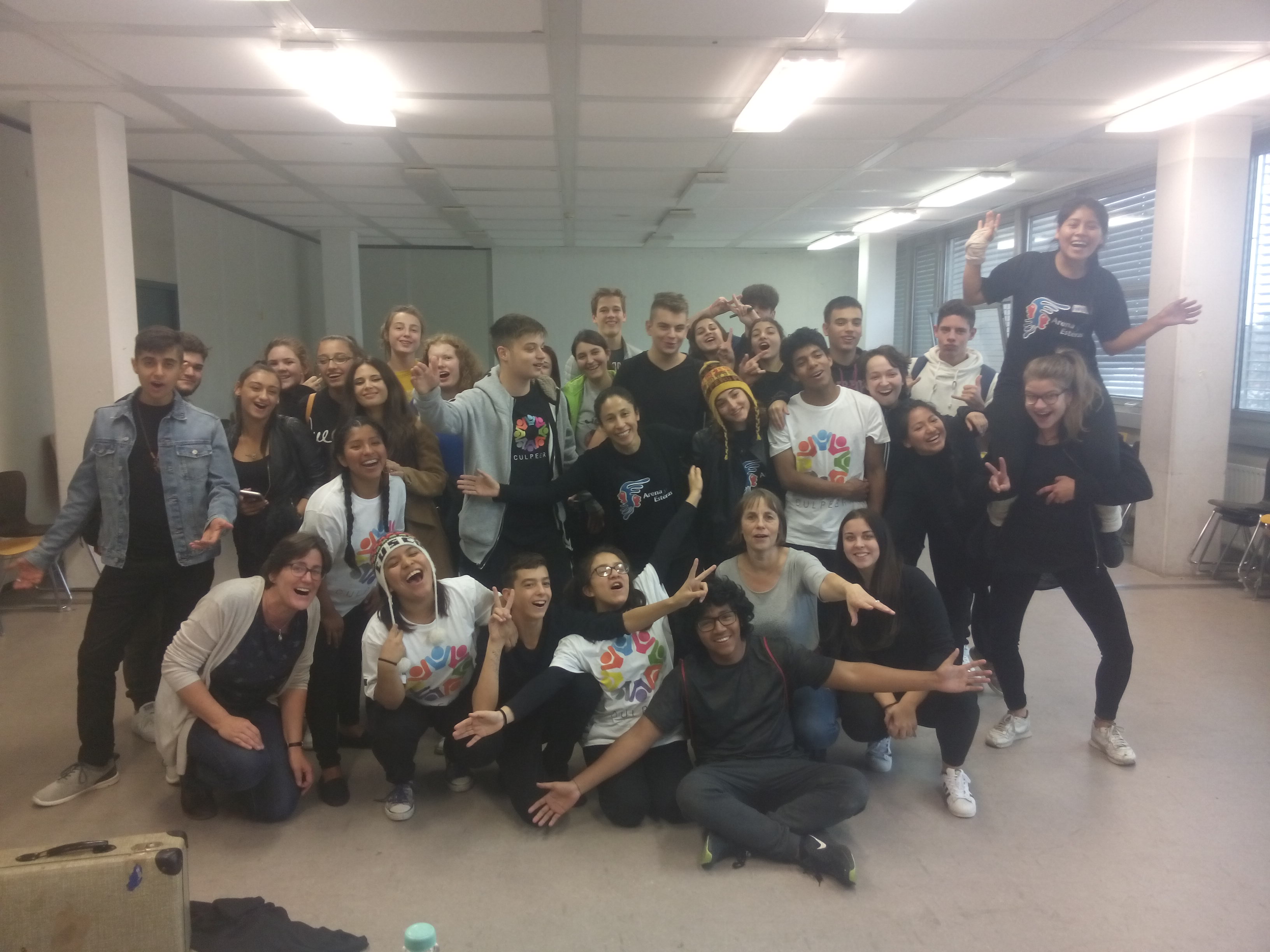 It all started on Monday with a reception by the Mayor of the City of Cologne. Students and teachers from Bulgaria, Greece, Italy, Slovenia and Hamburg came to Cologne to work there for one week as part of the CULPEER project. After a joint warm-up, the paths parted, while the teachers were discussing and testing the e-learning programme of the project, the pupils started an artistic project, guided by "Arena y Esteras" from Peru. Warming up exercises, body warning, conversations about migration and integration were the beginning. The joint performance was supposed to deal with this topic in some way at the end.

Then training took place: Juggling, acrobatics and dance. And in the end all this became a common staging. And this staging was something special! It reflected the energy with which the young people had worked and discussed. It showed the creativity with which young people had developed the performance. It integrated a wide variety of cultural expressions from the participating countries. And it reflected the professionalism of "Arena y Esteras", which brought together the many ideas of the European young people in the performance.

Here is the final scene.

The "Todos somos uno" at the end of the production was the experience of the week for the young people, which was shown in the subsequent evaluation: across all borders, we young people have a lot in common. The questions, problems and visions are very similar everywhere. But many of the young people also had a second experience: they were able to discover undiscovered skills and talents for themselves. And so the "We are all one" turned into "We are all unique". 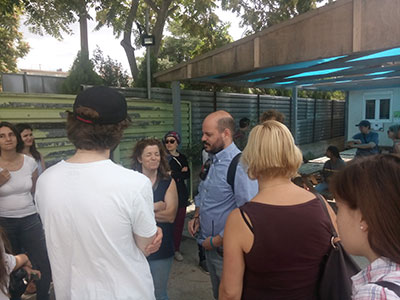 fth meeting of CULPEER was held in Athens. We met in the "Intercultural gymnasio of Athens" from June, 27 to June, 28. Main topic during the meeting was the e-learning-course of CULPEER. Each module was tested by us and discussed, so that in the end we had a version which was well prepared for all test session from other people than the staff.

The end of the meeting was dedicated to the preparation of the our last meeting in Cologne and the trainings for teatchers and youth. 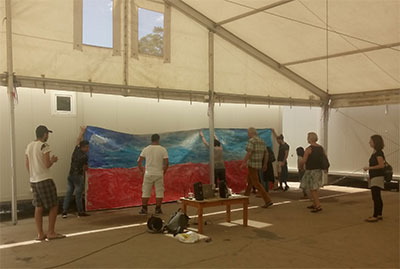 The second day of our meeting we visited a refugee camp in Athens together with two students of the school, who are engaged in the work with children in that centre. For most of us it was the frist time to be in refugee camp. We had the chance on the one hand to work creativly with some children.

On the other hand we talked a lot with a pedagogue of the camp, who explained a lot about the situation of refugees in Greece in general, about the camp itself and especially about the pedagogical work with children in the camp and in school.

In the end we agreed all, how important CULPEER projects would be in such circumstances. 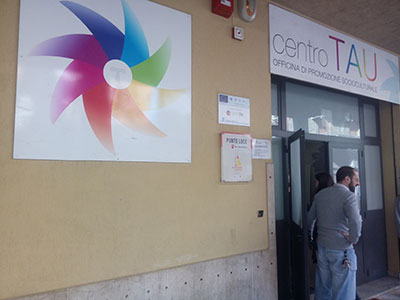 Palermo on Sicily was the place of 4th network meeting of CULPEER from April 11 to 13. Even we hoped before, Palermo didn't presen't us the best weather. But made us more concentrated in the agenda for the meeting, which was well organized by our colleagues from Music'Arte. We worked the whole time in co-wirking place close to the hostel.

Main topics of the meeting were the different intelectual outputs on which we worked very intensively, Also the prepartion of the following meeting end of June in Athens took some time within our schedule. 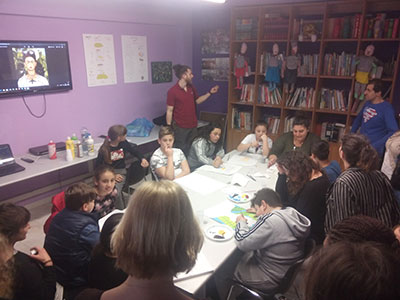 A very impressive part of the meeting was the visit of CENTRO TAU a cultural youth centre in the poorer parts of Palermo with a lot of migrant inhabitants. We had there the chance to get to know a lot about the concept, we saw some practical creative work of the youngsters and discussed the young people about the importance of the centre for them. Two of our group gave a interview to young people who produce a radio programme. The power of culture was felt by us in all the rooms.

End of September all the partners of CULPEER met in Ljubljana from 28th to 30th of the month. Our host of HUMANITAS organized the meeting perfectly. Besides a really tough schedule of the meeting there was time to get an impression of that beautiful capital of Slovenia.

On Friday we travelled to Maribor, where HUMANITAS had organized a interactive theatre play in a school about the topic "refugees". The students of that school and us didn't know before, what would happen, when we were told - identified by a short biographie as refugees from Iran, Iraque, Afghanistan, Syria and Turkey - we had reached the Meditiranian Sea, and were waiting for the boats to bring us to Europe...
What started than was a really hard experience, because we got a realistic impression of what all the refugees have to suffer from. Even that was only a very reduced impression, for few participants it was to hard.

After the play we had time to talk with four refugees whose stories had been adapted in to the roles of the play. Incredible stories, incredible experience of the refugees, mostly caused by the "Schengen Agreement". Important detail: In Slovenia are only a little bit more than 300 refugees registered.

Even that part of the meeting was very important, we talked also about a lot of other points, like the website of CULPEER, which now is online in the English version.
The part which took most of our concentration were the the modules of our training courses which will become an important part of the project.

Next meeting will be in Palermo, middle of April. We are looking forward.

From the 15th to 17th of June the second network meeting of CULPEER will take place in Hamburg in the north of Germany, where two partners of the network are based: Fritz – Schumacher – School and Büro für Kulur- und Medienprojekte gGmbH. The network will use the opportunity to take part in a workshop with Youth from Hamburg, young refugees and Fanfare Masolo, a cultural group from the DR Congo. Furthermore the networkers will visit the Fritz Schumacher School to get an impression of peer-to-peer learning and of integration in schools. 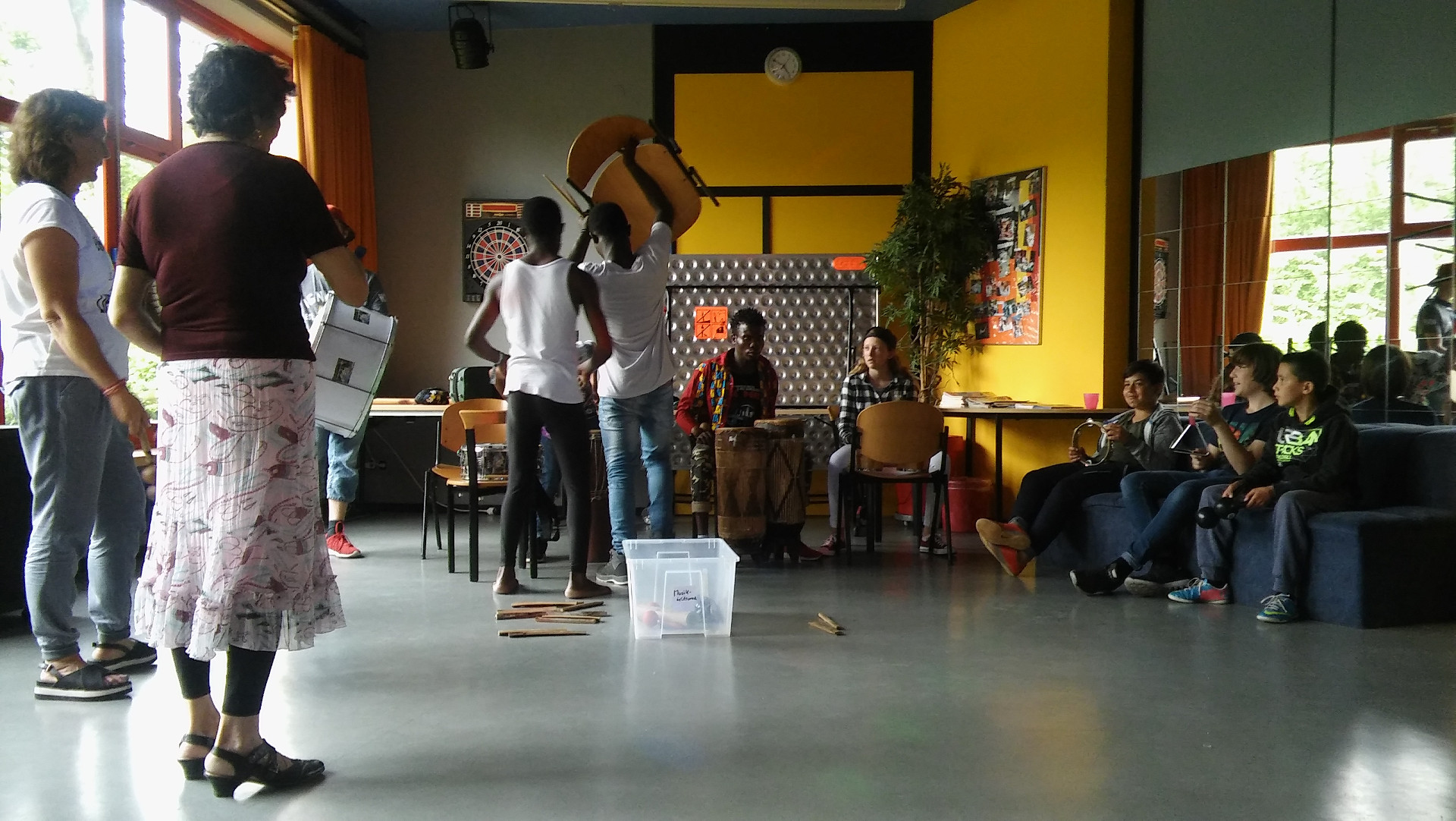 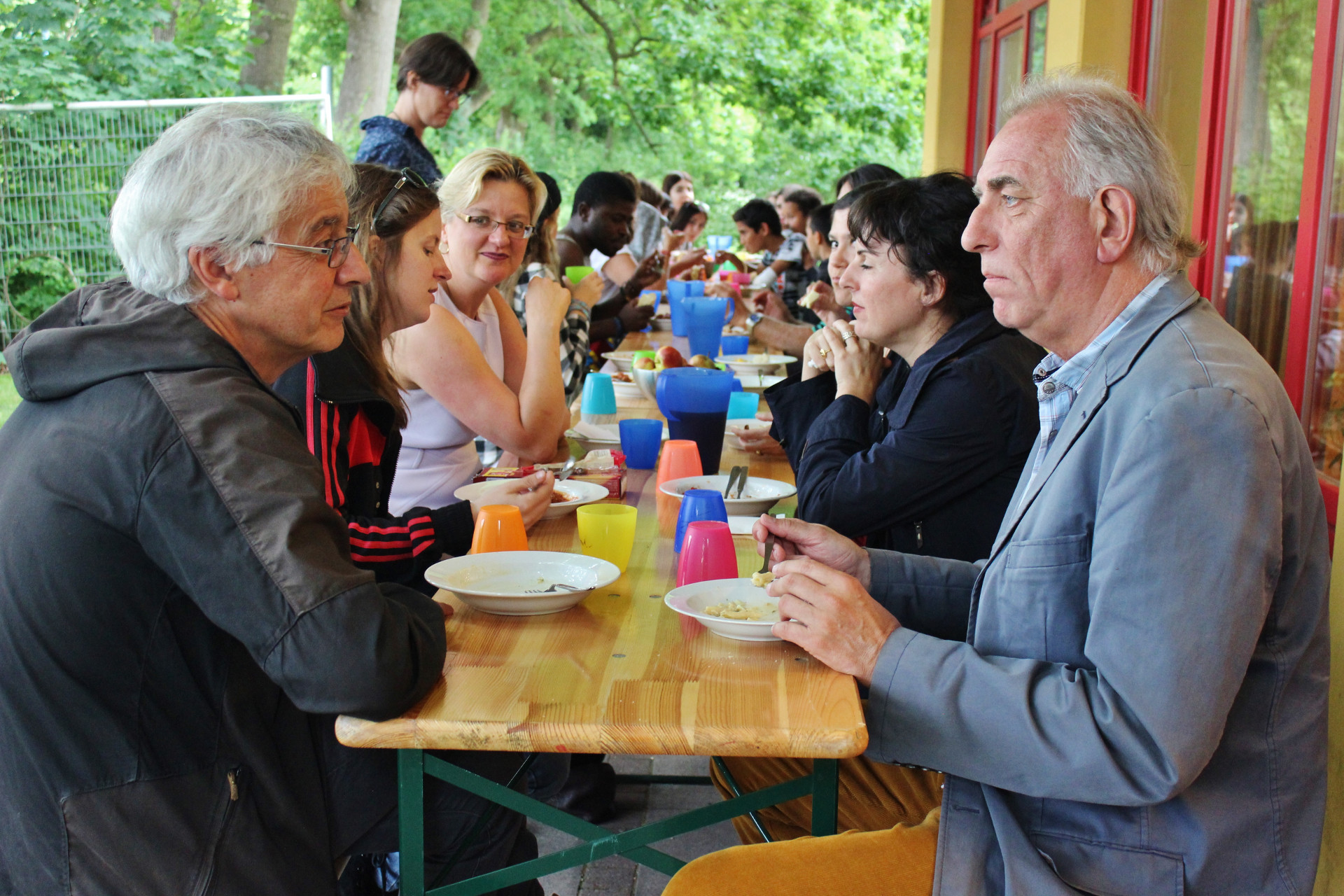 First partnership meeting under the CULPEER project in Sofia

In the period 6-7 February 2017 Sofia hosted the kick off meeting under the project CULPEER. The partners made good use of the opportunity to start their work and to discuss all important questions, relevant for the successful implementation of the project activities. 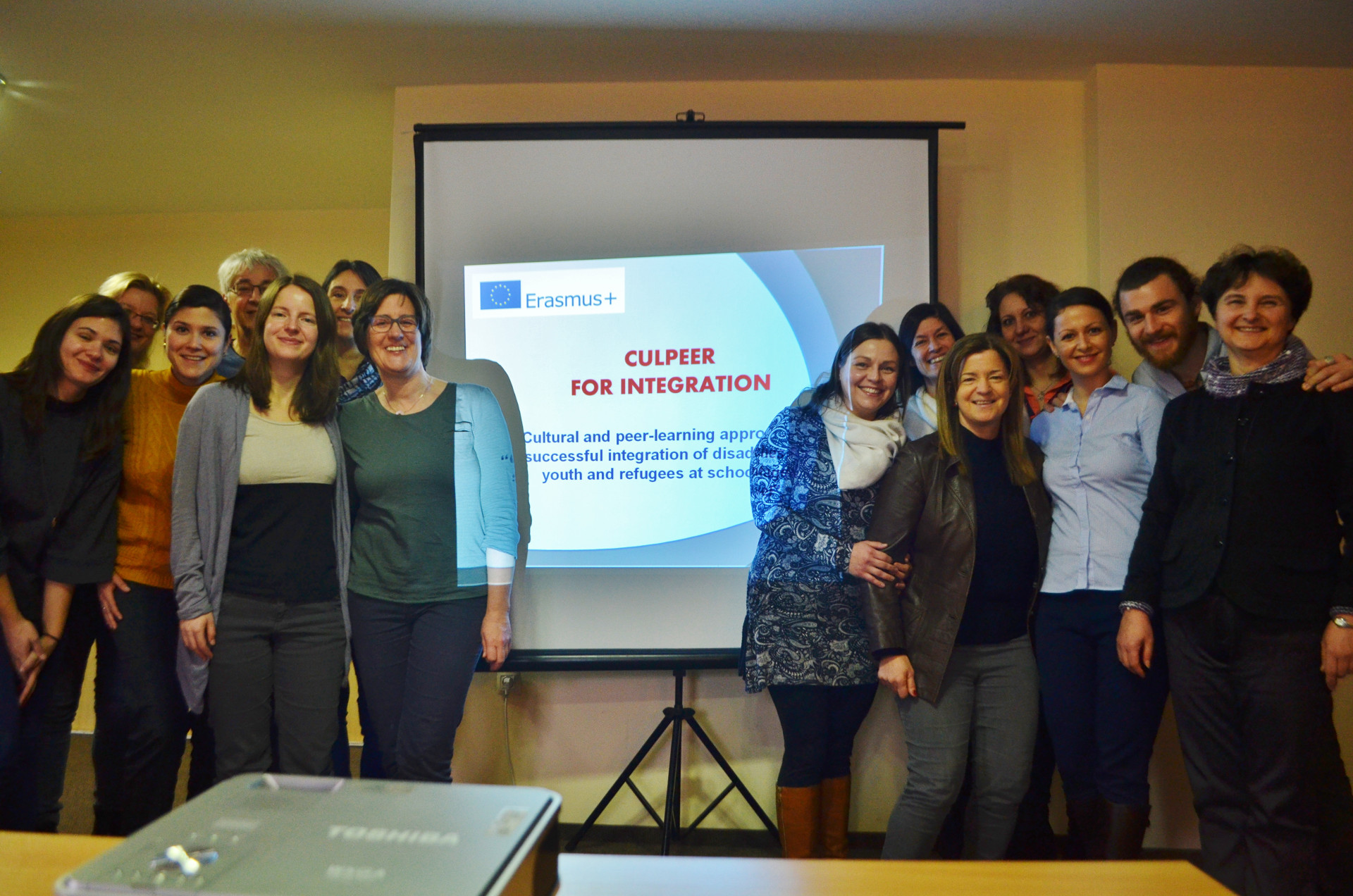